This was my first international trip on American Airlines and was I was excited to see what Business Class service would be like on this legacy carrier.  I recently decided to move most of my flying to American Airlines as their frequent flier program currently has the best perks available. One of those valuable perks are 8 systemwide upgrade that can be used to upgrade any economy fare to the next class of service.  Having found a really cheap fare to Shanghai,  I eagerly applied 2 of my systemwide upgrades to this trip (one for each way).  About 4 days out my upgrade cleared and I was given a new seat assignment (13D) in the last row of the business cabin.

This flight began at Chicago’s O’Hare International airport departing from the international pier (terminal K) where most of American Long-haul flights leave from.

As an Executive Platinum member of the AA frequent flier program, I was given access to the First Class Flagship Lounge at ORD located at the end of the K terminal.

At first I was excited at the opportunity to try a First Class lounge,  but after doing some research online I saw that my expectation should be low and my expectations were met. 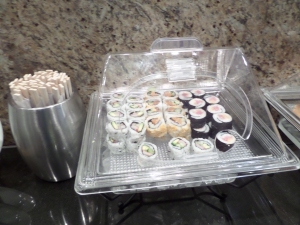 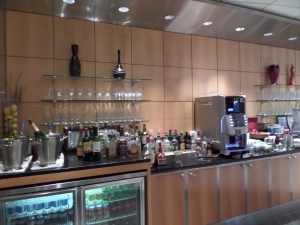 The Lounge had an open bar and fridge stocked with bottled water and soda. There was a decent continental breakfast spread and a small selection of commodity Sushi.  Now to be fair I think during lunch and dinner there may be other food selections available, but considering a flashly title like flagship lounge,  I would have hoped for something more. When comparing this lounge to what Delta and United offer, this lounge is right there in the pack.  The bar is currently set low for US airlines and airport Lounges.  This lounge is also relatively small and fairly crowded as there were several flights to asia leaving around the same time.

The one good thing was the lounge was fairly close to my gate and soon I waited in line to board my flight.  When it was my turn to hand over my passport and ticket, the gate agent paused and got on the PA to remind people to open their passport to the VISA page for china.  I had not done this as I did not a current Visa for china and I took this as kinda of a rude to make this announcement right in front of me. The agent was familiar with the transit without visa program for 72 hour or shorter trips and let me aboard as soon as I showed him my confirmation for my onward flight from shanghai.

Once onboard I settled into the seat that would be my home for the next 14 hours.  My expectations were again not high as on the 777-200 airplane American is using their older style business class seat that fold down to a bed, but at an angle.

But I ended up be pleasantly surprised with my seat.  It definitely was not the most comfortable seat ever, but I have to give Kudos for the abundant storage space.  I had places to but my wallet, Ipad, Ipod, Cell phone and camera.   There were little compartments to hold the magazines and a place to stick shoes. 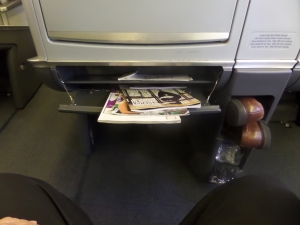 The seat also had a two piece table.  One that fold down from the seat in front and one that you pull out of the console.  You can kinda connect the two and make a huge table surface.

Also given out was a decent amenity kit and Bose noise-cancelling headphones for use during the flight. 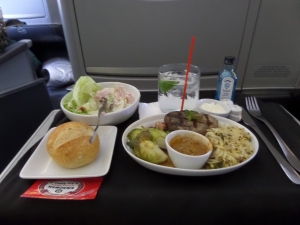 The Beef dish I has selected was decent and I especially enjoyed the Ice Cram Sundae desert. Service was not bad, but I did feel the flight attendants servicing this flight were not overly eager.  These were veteran flight attendants that knew how to serve efficiently, but were not always super attentive.

After dinner I tried the Inflight entertainment.  Looking at the screen you could tell this was not the newest Video system out there, but there were a decent selection of movies and I passed a lot of time watching two movies and almost and entire season of the show “Suits”.

About two thirds way through the flight a snack was served.  I ordered the fried noodles with Shrimp, which were “not” good, as the noodles were dry/overcooked.  The other option (Croissant Sandwich) didn’t look that much better though.

The final service about an hour before landing was a light lunch that consisted of an American Airlines version of the farmers market pizza from Pizzeria Uno’s.  The flavor was actually pretty similar,  though the crust was more like a school cafeteria pizza than one you would get a restaurant.

I thoroughly enjoyed what is one of American’s longer routes.  Fourteen hours on a plane can be an eternity,  but I managed to pass the time easily and really enjoyed the flight.