So this was flight was part of my first ever trip on British Airways.  I paid just over $2300 and 40,000 Avios  for this Club World ticket round trip Dulles to Dubai, connecting through heathrow.  This wasn’t best deal ever, but at least it would get me over the threshold for American Airlines Executive Platinum status. This was not a true mileage run (Trip just to earn Frequent Flier Miles) as I did leave the airport, but I also can’t really call it a true trip to see Dubai either as I didn’t really leave my hotel.

Overall I enjoyed the experienced as its always a treat to fly international business class.

Terminal 5  (not my favorite)

On this leg of the trip started with a fairly lengthy trip through Terminal Five Security.   I may have chosen the wrong line, but it took at least 30 minutes of waiting before clearing security after my flight from Washington Dulles.  It was my first time in the Terminal Five building and I’m not sure what all the fuss is about.  I suppose it a fairly compact terminal consider how much traffic flows through the space.  I decided to visit both the BA Galleries Lounge in the Main Terminal 5 building with access granted with my Club World Ticket.  Like the lounge in Dulles,  the BA lounges were modern but busy.  There were some nice food and drink choices, but given the crowds it definitely didn’t feel exclusive or that relaxing.  It was definitely a notch above the Delta Skyclubs  I frequent but no match for my favorite lounge in the US, (AMEX centurion Club). After some killing some time in the lounges I made my way to gate. 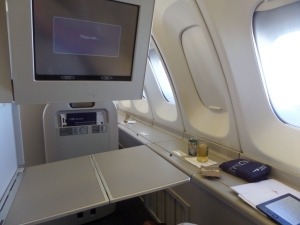 I had selected an Upperdeck windows seat on my 747 flgiht.  I love these seats because of the extra storage bins that are just below the windows.  One thing Club world seats don’t have, is a lot of is place to stick stuff.  If you are like me and bring only the essentials (Camera, Kindle, Ipad, Laptop, Ipod, Cell phone) the extra Bins are a godsend.

You’ll notice in my photo above British airways serves it soda in the smallest cans I’ve ever seen. They were 100ml if I’m not mistaken,  and its makes me think it would be good to be an Alcoa salesman in Britain.

The Club world seats are fairly comfortable and they do lie-flat.  However,  the seats are arranged in a Yin/Yang pattern so you end up staring at your seatmate during takeoff and landing when the privacy barrier is down.

Amenity Kits were handed out but this is one of the area where British Airways may need to rethink packaging.  The kits were not badly equipped, but the bag/case seemed more at home in premium economy or regular economy than something give to business class passenger.  It did have some nice Elemis toiletries, but the case is definitely one of the most underwhelming biz class kits I’ve received.

For Lunch I started out with the arabic mezza and a nice salad.  I also ordered one of British Airways Signature Drink, “the Kir Royale”.  I ordered beef for my entree, but it wasn’t memorable and I neglected to take a photo.  Later in the flight they did serve Afternoon Tea which was treat.  It is “British” airways afterall and they did an admirable job with clotted cream, jam, scones and tea.

Dubai and the Grand Hyatt

So after my red-eye flight from Dulles and my daytime trip from London, I was eager to get to bed.  Fortunately a few days before my trip I saw that award space at the Grand Hyatt Dubai had opened up and I was able to book a room with my points.  I recently started a Diamond trail with Hyatt so I was able to reap the benefits of being a top tier elite member of their loyalty program.  In this case, it meant that I had access to the Hyatt’s club lounge and late checkout.  This came in handy as my return flight was late at night (2:35 AM).  I got a late checkout from my room at 4pm and spent the rest of the evening having dinner at the hotel and lounging around the club lounge.

My room at the Hyatt was well equipped, had a comfy bed and great views of Central Dubai and the Burg tower. The TV was a very fancy Model from Bang&Olufsen, but it was a lot of style over substance as it was not intuitive to turn off/on and change channels.  The pool area was also very nice and the weather, although a little chill for the pool, was a very spring like 70 degrees.

The downside with coming the day before new years eve was the placed was packed with tourists.  This discouraged me venturing as I saw that all the prebook times for going up the Burg al Khalifa were all taken.  Also, all the restaurants I wanted to go to were booked so I decided to stay and eat at the Hyatt’s indian restaurant.  Food was very good but rather expensive compared to US prices, although that was probably due to its location in the hotel.  One piece of advice, be wary of ordering Iced Tea outside the US.  I find most of the time its not the version you expect. 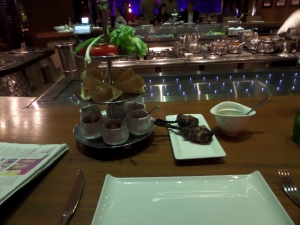 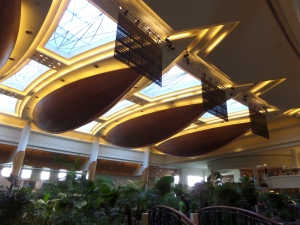