“Mr. Kim I’m going to need your seat on this Plane.  I’m booking you on the next flight three hours from now.”

Ok for normal people would hear this from a gate agent and start swearing.  I’m stuck at this damn airport for another three hours. SHIT!!

Well I’m not a normal person.  This past friday a gate agent uttered the above quote to me.  Instead of dread, my brain was doing the happy dance. Why you might ask? Well first this flight happened to be oversold.  The airlines count on some people being late or not showing up for flights so they often oversell the seats on a plane and play the odds.  Usually the airlines are good at predicting this, but every so often they get it wrong. On this flight they needed volunteers to give-up their seat and agree to take a later flight.  So why would a sane person intentional delay themselves?  For Money $$$$

In this case it was a travel voucher worth $300 off an American Airlines ticket.  Something I will definitely Use.

What also made volunteering for me appealing was that my flight happen to be leaving from Dallas Fort Worth Airport (DFW). 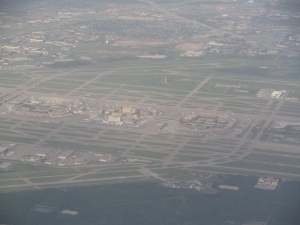 This is a HUB airport for American Airlines and happens to be home to my favorite Airport lounge in the US,  the Centurion Lounge. 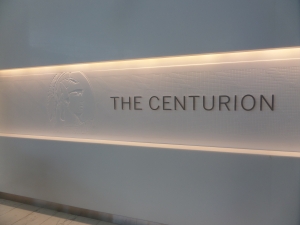 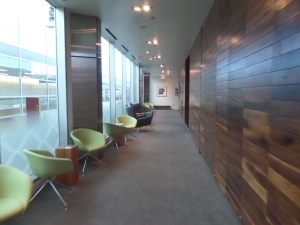 This is a lounge operated by American Express for its AMEX Platinum and Centurion Card Holders.  These are cards that charge $450+ annual fees, but that provide a lot of perks including access to a network of premium lounges.  Until recently these included lounges operated by American Airlines and Usairways.  Unfortunately that partnership ended, but instead American Express is opening up a number of new lounges including this one at DFW and another at Las Vegas international Airport.  More are in the works including San Francisco which will be opening later this year.  For those who have never been to a airport lounge, it is definitely recommended for longer layovers at the airport. Most lounges provide free wifi access, Sodas, Coffee, Snacks, and Some Alcoholic Beverages.  They also provide a more comfortable and mostly less crowded place to rest or get work done.  Really nice lounges (Like the centurion lounge) have gourmet food, complimentary SPA treatments, Shower Rooms, and Signature Cocktail Bars. During my recent stay I decided against any SPA treatments (although I got a manicure here twice before).  I did have a very nice lunch from the buffet that features Gourmet TexMex food.

Most US lounge run by the airlines are pretty lackluster, but come in handy as place recharge you phone and get a quick drink.  The Centurion Lounge is an exceptional lounge comparable to a First class lounge in Europe or Asia, and is definitely worth a visit.  If you don’t have a AMEX Platinum Card,  you can gain entry for the day for $50.  This is a bit of splurge,  but if you have a long layover at DFW, you can more than make up for the fee by having a nice meal, signature cocktail, and Spa treatment.  Ohh and I like the Oatmeal Raisin cookies,they are great.