This trip starts in Shanghai International Airport’s Terminal 2.  Thai airways uses the Shanghai Airways lounge for its business class passenger. At check-in I was given a lounge invitation and instructed to clear passport control and security. 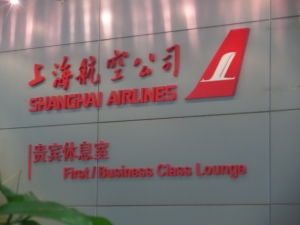 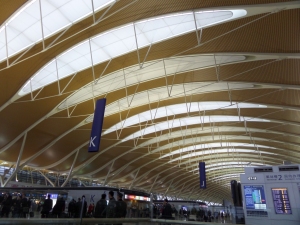 This lounge was fairly large and seemed to have a decent breakfast spread.  I choose only to have a diet coke as I was still full from the nice breakfast that I had eaten with my friend Terri at the Park Hyatt.

Boarding soon commenced, and I was on board my plane.  This Thai airways Airbus 330 was configured with two classes. The business class seats were setup in a 2 – 2 – 2 layout.  The cabin was about two thirds full and I managed to get a seat in the center column with an empty seat next to me.

Waiting for me at my seat was a fairly nice amenity kit for this 4.5 hour flight. The brand was one that I did not recognize but apparently is a high-end cosmetics firm. 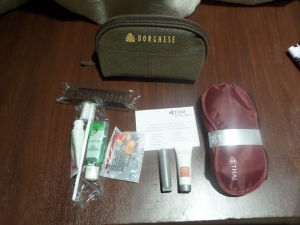 Also provided were a set of comfortable headphones although they were not noise-cancelling.

Thai airways Business class seats are angled flat and therefore do not recline to a completely flat sleeping surface .  Though these seat are little dated compared to the many lie-flat seat being offered by other airlines, they were still very comfortable especially for a 4.5 hour flight.

The In-flight entertainment system was fairly modern with a very large screen and gets turned-on while still on the ground.  Our flight was delayed about 90 minutes, but it was bearable because I was able to pass the time watching one of the movies. 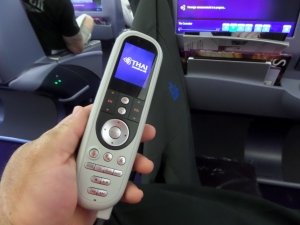 Lunch was served on this flight with a Fruit course followed by an Entree.   For the entree I choose chicken, which was fairly tasty, but seemed similar to something I would have been served in coah.

Later in the flight,  I was actually a little hungry.  I did notice that some of the other passengers had gotten some Noodles, possibly some instant ramen as a snack.  I decided not to ask for this and stay a little hungry as I was planning on getting some more to eat later when we arrived in Bangkok. Service during the meal service and during the entire flight was excellent and I was surprised at how many flight attendants appear to be helping with service.  I saw two men and two women servicing the cabin which had 36 seat and even fewer passengers.

As my first flight on Thai airways I was very happy even with a 90 minute delay. I would not hesitate to fly them again especially if I can book into their business class product.